Oh, deer: Here’s how to reduce the risk of a costly collision with Pennsylvania’s state animal 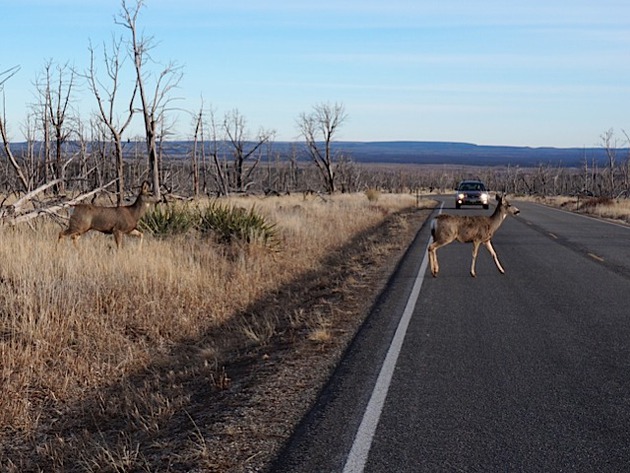 It doesn’t get any more Pennsylvania than Perry Como, the pride of Canonsburg, Washington County, crooning “Home for the Holidays.”

“I met a man who lives in Tennessee, and he was headin' for, Pennsylvania and some homemade pumpkin pie, From Pennsylvania folks are travellin' … ”

Another Pennsylvania distinction is how often travels are interrupted by a collision with a deer.

In fact, we have more than any other state, the result of being at the intersection of a lot of roads and some 1.5 million deer.

What’s more, the odds of a collision double from October through December.

Besides the obvious risk to deer and driver alike, there’s a staggering financial cost in the form of damage to cars and trucks. Across the United States, an estimated 115,000 collisions in 2013 resulted in $400 million worth of damage.

The average repair cost is more than $4,000, but that doesn’t tell the full story. The nature of the collision matters, too, and begs an understanding of the difference between comprehensive coverage and collision coverage.

• If you hit a living deer (or it collides with you), that falls under comprehensive coverage. A typical deductible is $100 to $250 per claim.
• However, if the deer is dead or wounded when you collide with it, then it falls under collision coverage. Here the deductible typically is more like $500 to $1,000.

Of course, you typically don’t get to choose which type of collision you have. But you can take steps to avoid them altogether.

• Be more alert at dawn and dusk, when deer are most active.
• If you feel the need to swerve, use caution and be aware of oncoming traffic and your surroundings.
• Slow down - headlights only shine 200 to 250 feet in front of a vehicle, and a standard-sized vehicle typically takes 240 feet to come to a complete stop from 60 mph.
• When you see a deer cross the road, slow down and expect more to follow.
• Watch for "deer crossing" signs and slow down when they are present.
• Use high beams while driving at night if there is no other traffic around.

So let’s be careful out there. Relax, focus, and enjoy the rest of our song.

“Oh, there's no place like home for the holidays, Cause no matter how far away you roam, If you want to be happy in a million ways, For the holidays, you can’t beat home, sweet home … ”