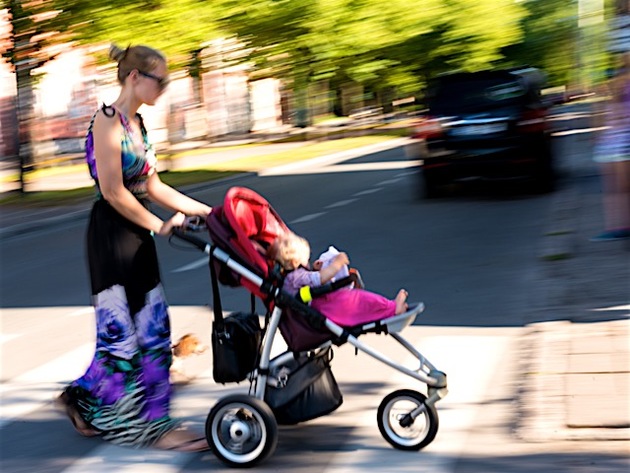 The next time you go to the movies, think about how you got there.

You probably drove. On your way, you may have witnessed someone crossing a street, jogging, or even walking to the same cinema.

As you settle into your seat, consider these facts:

--In less than the time it takes to watch the movie previews, a pedestrian will be injured somewhere in the United States: one every eight minutes.

--By the time the credits roll on your movie, a pedestrian will be killed in a traffic crash: one every two hours in America.

In 2013, 4,735 pedestrians were killed and an estimated 66,000 injured in traffic crashes in the United States, according to the National Highway Traffic Safety Administration. (Injuries likely are underreported, however, because they don’t include crashes on private property, such as parking lots and driveways.)

These statistics are enough to induce a jump scare to rival any horror movie you’ve ever seen. They also underscore the importance of drivers and pedestrians alike paying more attention to safety.

Other key findings from the 2013 data:

The good news is that pedestrian motor vehicle crash deaths have dropped sharply since 1975, according to the the Insurance Institute for Highway Safety, probably because fewer people are walking. The bad news is they still represent 14 percent of crash deaths.

Studies have found that pedestrians typically are more responsible than drivers for pedestrian crashes, according to the Insurance Institute for Highway Safety.

“In Baltimore, Washington, D.C., and North Carolina, pedestrians were almost always judged culpable in midblock and intersection dash crashes, which are crashes involving a pedestrian who runs into the road or otherwise appears suddenly in the path of a vehicle. Drivers were usually at fault in other crash types such as when a vehicle is turning or backing up, or when a vehicle leaves the road and strikes a pedestrian.”

Of course, most of these deaths and injuries are preventable. The National Highway Traffic Safety Administration offers these safety tips.