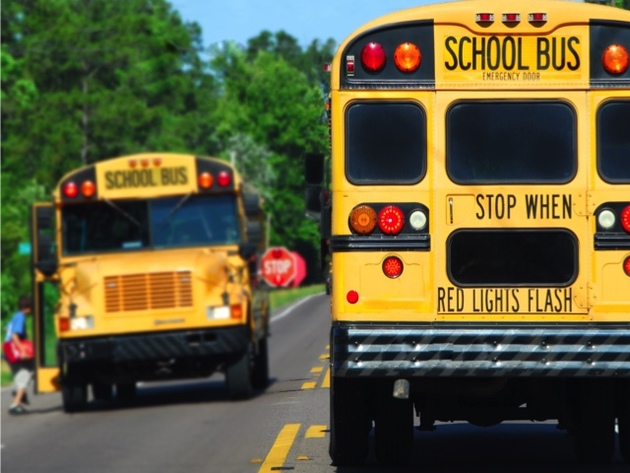 Most important, school buses are the safest mode of transportation for getting children to and from school.

That said, the greatest risk to children's safety is not riding the bus but approaching or leaving the bus. With school starting again, it's the perfect time to revisit school bus safety tips, courtesy of the National Highway Traffic Safety Administration:

CHILDREN
• Get to the bus stop at least five minutes before the bus is scheduled to arrive.

• Wait until the bus stops, the door opens, and the driver says it's OK before stepping onto the bus.

• If you have to cross the street in front of the bus, walk on the sidewalk or along the side of the road to a point at least five giant steps (10 feet) ahead of the bus before you cross. Be sure that the bus driver can see you, and that you can see the bus driver.

• Use the handrails to avoids falls. When exiting the bus, be careful that clothing with drawstrings and book bags with straps don't get caught in the handrails or doors.

• Never walk behind the bus.

• Walk at least three giant steps away from the side of the bus.

• If you drop something near the bus, tell the bus driver. Never try to pick it up because the driver may not be able to see you.

FOR DRIVERS
• When backing out of a driveway or leaving a garage, watch out for children walking or bicycling to school.

• When driving in neighborhoods with school zones, watch out for young people who may be thinking about getting to school but may not be thinking of getting there safely.

• Slow down. Watch for children walking in the street, especially if there are no sidewalks in neighborhood.

• Watch for children playing and congregating near bus stops.

• Be alert. Children arriving late for the bus may dart into the street without looking for traffic.

• Learn the "flashing signal light system" that school bus drivers use to alert motorists of pending actions:
o Yellow flashing lights indicate that the bus is preparing to stop to load or unload children. Motorists should slow down and prepare to stop their vehicles.
o Red flashing lights and extended stop arms indicate that the bus has stopped, and that children are getting on or off. Motorists must stop their cars and wait until the red lights stop flashing, the extended stop sign is withdrawn, and the bus begins moving before they can start driving again.

There's nothing more important than children's safety, but drivers in Pennsylvania also have their self-interest at stake. Each year, according to the Pennsylvania Department of Transportation, more than 1,000 motorists don't obey the School Bus Stopping Law.

Drivers who are convicted of violating the law receive five points on their driving records, a $250 fine, and a 60-day driver's license suspension.

If you're a driver who comes upon a school bus and you're not exactly sure what to do, the department offers this general advice to ensure the safety of children:

If in doubt, stop!