Picture this: a safer, more respectful way to take selfies 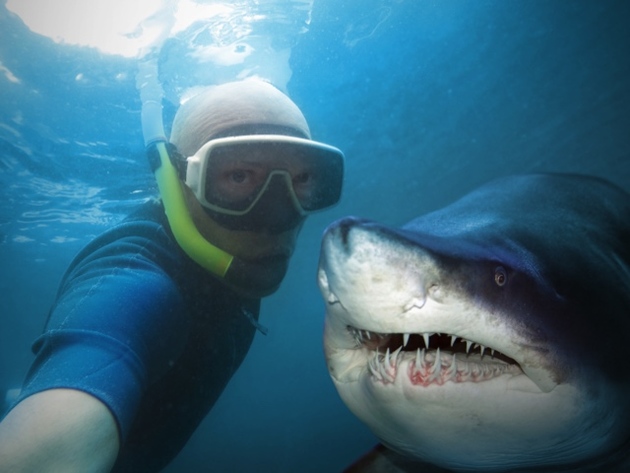 In Greek mythology, Narcissus saw his reflection in a pool of water and fell in love with it. He was so taken with his own face that he stared at it until he died.

In modern-day reality, a love of selfies is sometimes dangerous or even deadly. In fact, one study in 2015 found that more people died from selfies than from shark attacks.

Among other deaths, according to CBS News:

• Two men died in the Ural Mountains while taking a selfie with a live hand grenade;

• A 21-year-old woman, camera in hand, plunged to her death from a Moscow bridge;

• In March 2016, a Washington State man fatally shot himself in the face while he and his girlfriend posed for photos with a gun.

Selfies clearly are here to stay. By one estimate, 18- to 24-year-olds take 1 million selfies each day across the world (Australians take the most, followed by Americans and Canadians.)

But there's an increasing recognition that the act of shooting selfies can be taken way too far, with tragic consequences.

Erie Insurance introduced a #PracticeSafeSelfies campaign, complete with a series of graphics: for instance, there's one of a red-haired woman snapping her photo with a smart phone even as her car's inflated airbag obscures her face. The headline: "Yeah, great shot."

The absurdity would be funnier if it didn't imitate real life. A Maine driver trying to take a selfie with his friends crashed into a tree; two women sitting in the passenger seat -- and not wearing a seatbelt -- suffered the worst injuries.

So many people took bear selfies in 2015 that the U.S. Forest Service had to issue an advisory, warning visitors to keep their distance. Most bears aren't as friendly as Smokey Bear.

In Spain, officials banned runners from carrying cameras or recording devices during the annual Running of the Bulls in Pamploma.

Russian police instituted a safe-selfies campaign in the wake of 10 selfie-inflicted deaths and nearly 100 selfie-induced injuries. They warned of dangers associated with selfies and guns, tigers, railroad tracks and roofs.

Clearly, selfies are an example of how technology can get ahead of our best use of it. Now there's a recognition that we need some guidelines.

"Never take a selfie in a situation that can put your life or health in danger," she says. Or anyone else's.

Get permission: If your girlfriend is in your photo, make sure she is OK with it. "Let her know what you plan to do with it and stick to your plan. Don't post anywhere different without her permission."

Don't succumb to bad taste for humor's sake: "If you are in a situation that you think is funny, stop and consider how it will appear to others. Never take a selfie in a public restroom where someone else may be in an embarrassing position or situation."

Be mindful of where you are: "For example, if you are at a holocaust museum, taking a selfie in front of an exhibit shows a lack of respect for those whose lives were lost in this horrific era." Other places where selfies are never appropriate include a funeral, ICU or critical care unit in a hospital, and disaster site where people died.

Show kindness: "When you see someone who is less fortunate than you, don't stop and pose for a selfie. Instead, do something nice like give a blanket to a homeless man, offer to get something off a top shelf for a handicapped person, or hold a door for a young mom struggling with toddlers and packages."

Offer help, not a photo: "If you witness an accident or someone getting injured, call for emergency help and stay with the person. Don't whip out your cell phone and start snapping selfies as you assist. The only time you should take a picture of the situation is if it can be of some help later to show what happened. Never post the photos of a tragedy or accident on social media."

Don't overdo selfies on social media: It's OK to snap photos of yourself eating cereal, working out, working, having lunch. "Just don't think everyone wants to see every single aspect of your day. Choose one good one (preferably one that is interesting to someone other than you and your mama) and post it.

"If you do more, people may see you as narcissistic," Mayne said.

And you know what happened to Narcissus.