Push, don't lift and 10 other tips for safer snow shoveling 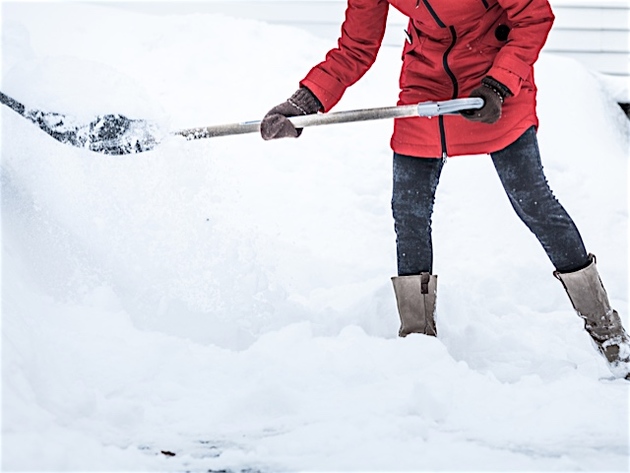 The January 2016 blizzard dumped a record 30.2 inches on Harrisburg. No one knows what the future holds for snowfall, but it's always a good idea to anticipate whatever Mother Nature might throw at us.

Snow shoveling can be a lot of work -- 15 minutes is akin to bicycling five miles or raking leaves for a half hour -- and even dangerous if you overdo it. Cold weather constricts our blood vessels, decreasing blood supply to vital organs.

"That's bad news for people with heart problems, diabetes or high blood pressure," noted this Washington Post story. "But just as big a problem is that many people dig in despite not having exercised in weeks or months or years.

Snow shoveling tends to be a goal-oriented activity, which can lead some shovelers to push too hard. From 1990 to 2006, an average of 11,500 snow-shoveling-related injuries and medical emergencies occurred annually in the United States, according to a 2011 study. Cardiac-related injuries accounted for less than 10 percent of the cases but each of the more than 1,600 total deaths.

Given the exertion involved in shoveling, experts recommend that if you have a medical condition or don't exercise regularly you should speak with a doctor before shoveling.

If you are going to shovel, consider these tips for doing it safely:

• Warm up your muscles with light exercises.
• Winter Storm Jonas aside, try to stay on top of the snow and clear every few inches to manage your workload.
• Use a shovel with a smaller blade that requires lifting less snow; one shovel of wet snow could weigh as much as 25 pounds.
• When gripping a shovel, keep your hands at least 12 inches apart to increase your leverage.
• Push the snow, don't lift it. This will save energy.
• If you have to lift snow, squat with your legs apart, knees bent, back straight and stomach muscles tightened. Don't bend at the waist.
• Scoop small amounts of snow and walk to where you want to dump it.
• Don't throw snow over your shoulder, which requires a twisting motion that stresses the back. If you need to move snow to one side, reposition your feet to face the direction the snow will be going.
• Stay hydrated because you're essentially putting your body through a gym workout. Dehydration is as big of an issue in the cold winter months as it is in the summer.
• Avoid caffeine or nicotine. They are stimulants that can increase heart rate and cause blood vessels to constrict, placing extra stress on the heart.
• Wear breathable, loose-fitting layers of clothing that you can peel off if you get too hot.

Finally, remember to be a good neighbor and look out for others who might need a hand with their shoveling. A big snowfall can be insult enough; there's no point in anyone adding injury to it.