CFL vs. LED: an illuminating look at energy-efficient light bulbs 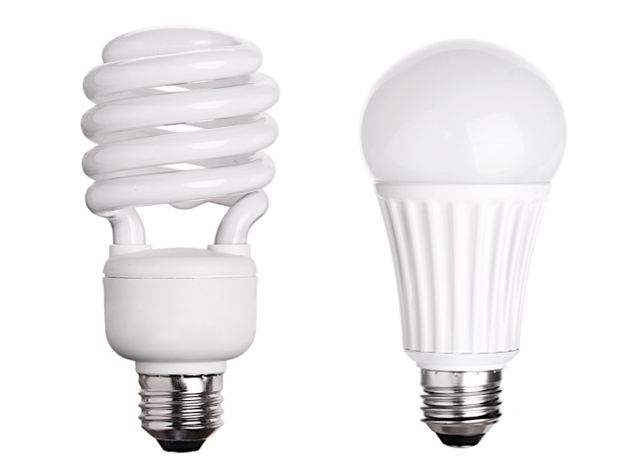 We're engulfed in choices today, from clothing to food to TV subscriptions.

The light bulb aisle is no less daunting, especially when it comes to the alphabet soup of CFLs and LEDs.

Which begs the burning question: What's the best lighting option for you and your family?

First, some background. In 2007, the U.S. Congress passed the Energy Independence and Security Act, which required that new light bulbs be 25 percent more efficient.

Incandescent bulbs have served us well for more than a century, but they aren't very efficient. Some 90 percent of their energy goes to heat, as you've noticed if you ever touched one that was on.

Compact fluorescent bulbs, or CFLs, were first introduced in the 1980s. Familiar for their spiral tubes, CFLs use 25 to 35 percent less energy than incandescent bulbs. But they also get hot, don't turn on immediately, can't be dimmed and generally aren't meant for outdoor use.

They're also problematic if cracked because they contain mercury, a dangerous heavy metal. For this reason, CFLs never should be put in with regular trash. The bulbs can be dropped off for free recycling at Home Depot and Lowes; Dauphin County residents can take them to the Dauphin County Recycling Center.

The greater efficiency breakthrough came with light emitting diode (LED) bulbs, which use 75 percent less energy, put out little heat, and last 25 times longer than incandescent bulbs. It has been suggested that the same LED string of holiday lights could still be in use 40 holiday seasons from now.

LEDs date to 1962, but they initially only emitted red light so were limited to use as indicator lights and in laboratory equipment. They discovered a much broader market -- including residential -- once they became available in the visible, ultra-violet and infrared spectrums.

Not that many years ago, it wasn't unheard of for an LED bulb to cost $50 or more. But now the price for a bulb is in the single digits, putting LEDs on a par with CFLs.

The website thesimpledollar.com compared light bulbs based on a 25,000-hour lifespan, or three hours per day for 23 years: It would require 21 incandescent light bulbs to achieve that many hours, with a cost to purchase and operate of $201; three CFL bulbs, $48; one LED bulb, $38.

"Now consider that those savings are from just one bulb," the website noted. "Think about the number of lights in your house — some fixtures, like chandeliers or ceiling fans, probably even use three bulbs or more. If you replaced 20 incandescent bulbs with LED light bulbs throughout your home, you could save up to $3,260 over their 23-year lifespan (and that’s assuming utility rates don’t rise)."

Simply changing just the five most-used lights in your home could save approximately $44 per year on your electric bill.

SHOP FOR LUMENS
With energy-efficient bulbs, wattage is less of a concern. Instead, consumers should focus on lumens, or the amount of brightness a bulb provides. The more brightness, the greater the lumens.

These and other tips on how to shop for light bulbs are available on this chart, available for free download from the U.S. Department of Energy. The chart includes the lighting facts label that lightbulb packaging must include.

The chart is similar to the nutrition labels on food products -- you know, the one that helps you negotiate among all those varieties of spaghetti sauce.