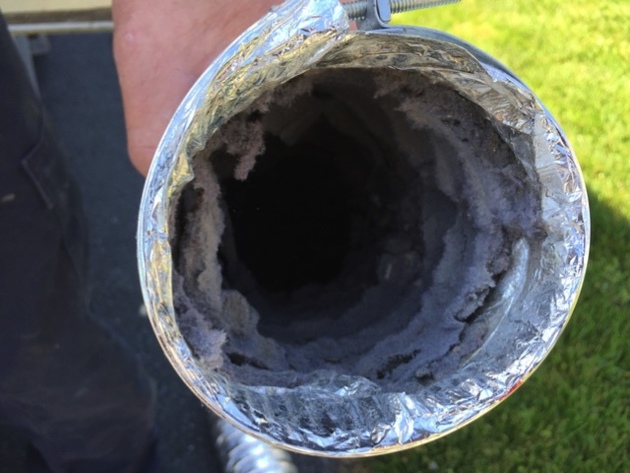 A Google search of "dryer fire" readily yielded three incidents that occurred within one month of each other:

These were by no means isolated incidents. Each year, according to the U.S. Fire Administration, 2,900 home clothes dryer fires cause five deaths, 100 injuries and $35 million in property loss.

Other estimates put the number of dryer fires at 15,000 to 17,000 per year, surpassing chimney fires in frequency. The leading cause: failure to clean dryers of flammable lint.

Dryers rely on heat to help remove water from freshly washed clothing. As clothes dry, lint detaches. Much of it gets caught in the lint trap, which typically is found near the bottom door seal. Over time, lint also builds up in the vent pipe that runs from the dryer to the outside.

A build-up of lint can block air flow, causing the dryer to operate inefficiently and possibly overheat.

"A blocked vent is like a hand on a hair dryer," according to 41 Action News in Kansas City, Mo. "All that heat could eventually ignite the lint, which is why you need to have a clear passageway so the air can exit."

Among the signs that your dryer presents a danger:

The U.S. Fire Administration offers these safety tips to prevent a clothes dryer fire at home:

The National Fire Protection Association recommends that "once a year, or more often if you notice that it is taking longer than normal for your clothes to dry, clean lint out of the vent pipe (also called a dryer exhaust duct) or have a dryer lint removal service do it for you."

Most homeowners, according to HomeAdvisor.com, spent $94 to $170 to have their dryer vents cleaned.

We know of one home in Derry Township that had never cleaned its aluminum, accordian-like vent pipe since purchasing the dryer eight years prior. The homeowner opted to go with the recommendation of a professional HVAC technician just to replace the existing duct with a new one for $130.

Dryer maintenance might seem like an inconvenience, especially on top of all the laundry your household produces. But then compare that with the prospect of a dryer fire that damages or even destroys your home or, worse yet, harms someone within it.